Michael N. Hansen (born December 28, 1989 in Yarmouth Port, Massachusetts) is a former ZOOMer from the show was in seasons 5 and 6 of the revived version of ZOOM.

Outfits he wore on ZOOM[]

Mike wore an orange sleeved shirt with some flowers located along the neck.

Mike is with Kortney. 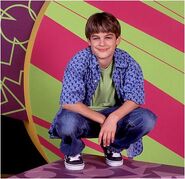