Kenneth Andrew Yates Jr. (born October 29, 1984) was a former ZOOMer for seasons 2 and 3. He was born in Grand Forks, North Dakota, to Anna-Maria and Kenneth Yates, Sr., who was in the Air Force. Kenny moved around the country a lot before his second birthday, and he has a younger sister named Danielle (born 1989). He spent his most of the first part of his life growing up in Las Vegas, before moving to Massachusetts, where he auditioned for the show ZOOM.

Guest Appearances on Other Shows[]

I'm funny, smart, short and fast. Other ZOOMers would say I'm nice, not tall but not short, intelligent and friendly. I love to act, sing, dance, draw and watch the clouds go by. My family is very cool. My dad is funny, my mom is awesome, and my sister is crazy but cute! And we've had lots of family pets: four dogs named Dixie, Dexter, Dutchus and Buffer, and two cats named Ashes and Sam. On the ZOOMset, I'm famous for rapping about the crew members. I love ZOOM games and made the game saving catch when we were playing Scoop . I think ZOOM playhouse really rocks, and the Café ZOOM Castle Cake is the tastiest ZOOMtreat around.

And to all the ZOOMers out there: Thanks for watching. I hope you enjoy this season. It is very fun making it, and I'm glad I can share it with you.

I was a superhero which is called Ubbi Dubbi Man.

Outfits he wore on ZOOM[]

Kenny wore a navy blue t-shirt with some orange along the top and on the sleeves with two horizontal navy blue stripes (and a white one in the middle) on each sleeve. 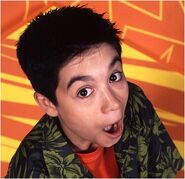 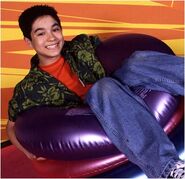 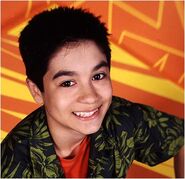 Kenny and Buzz pose together.

We all scream for ice cream 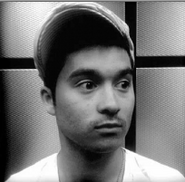 A 'now' picture of Kenny Yates. 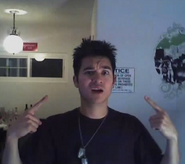 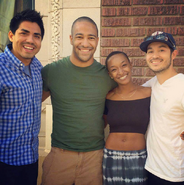 Kenny is with Pablo, Eric, and Frances.
Community content is available under CC-BY-SA unless otherwise noted.
Advertisement