Caroline Judith Botelho (born November 22, 1989) is a former ZOOMer. She is most notable for being the longest running one, stay in season 2 thru season 5. She is also notable for being the most recent cast member to reprise their ZOOM role, after recording a special ZOOM segment for WGBH in April 2020.

"ZOOMers would probably agree, and say that I'm also a good friend. My family is really great! Besides my mom and dad, I have a brother and sister. They've given me the nickname "Comet Tail" because my Dad and Grandpa used to launch me into the deep end of our olympic pool. My favorite ZOOMactivity is the ZOOMsci & Dancing Raisins. See if you can make some raisins dance! And to all the ZOOMers out there: Hope you enjoy the show! We have a blast making it. You should see all of the funnys. On the ZOOMset, I'm famous for my imagination. Like sometimes, I would wear my half ponytail to the left instead of the right."

Guest Appearances on Other Shows[]

Caroline wore a navy blue and light blue t-shirt with horizontal stripes. (Garrett DiBona wore something like that for the show's 5th season, but the one Caroline had on had a white collar.) 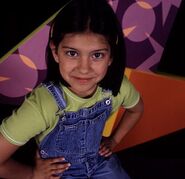 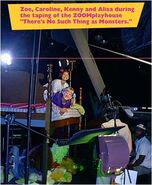 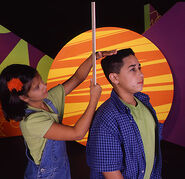 What is Caroline doing with Claudio?

Caroline on the floor with Alisa posing together. 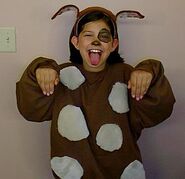 Caroline dressed in a dog costume. 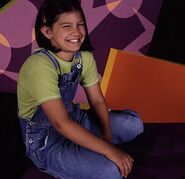 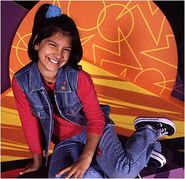 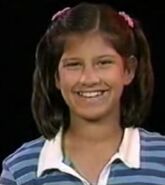 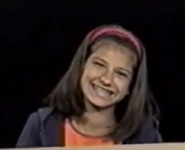 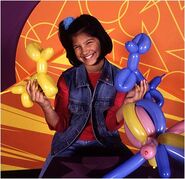 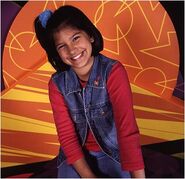 Caroline posing for the camera.

Caroline by the stove.

Caroline and Kaleigh hug together for the photoshoot.

Caroline peeking from behind the refrigerator. 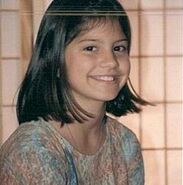 Caroline and her sister Nina talking about the 9/11 attack on a special Zoom episode.

Caroline as a Baby at the End of ZOOMy Mozart

Veteran ZOOMer, Caroline, pays a visit to the season 6 cast.