Alisa Besher (born October 3, 1985) was a former ZOOMer from the show in seasons 1 and 2 of the revived version of ZOOM.

I'm funny, outgoing, crazy and a little disorganized. I think other ZOOMers would say I'm creative and silly. When I'm not on the ZOOM set, I enjoy school and hanging out with friends. During the summer, I'm a Counselor in Training at a local camp where I get to work with lots of kids.

The silliest thing I've ever done on ZOOM is dress up in crazy outfits for the plays! Zmail is my favorite part of this site. I check it out every week! The Butterfly Cake and Homemade Ice Cream are the most delicious ZOOM treats, and my favorite ZOOMsci is the Rube Goldberg Invention. The best things about working on ZOOM have been going to the Emmy's and just relaxing in the ZOOM room during taping.

I do think that being a ZOOMer has changed me. I'm better around crowds of younger kids, and the experience really helps me at camp. And I've met so many new people! I don't think that people really treat me differently, at least my friends don't. But I guess more people know who I am now. I think in twenty years I'll look back on my ZOOM experience and think, "Those were some of the best times of my life!"

And to all of the ZOOMers out there: Thanks SO much for watching! It's a great experience.

Outfits that she wore on ZOOM[]

Alisa wore a middle sleeved orange shirt with the sleeves being navy blue. On some episodes, she wore the navy blue hooded sweater jacket. 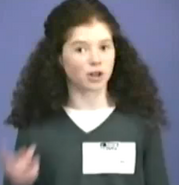 Alisa before she was a ZOOMer. 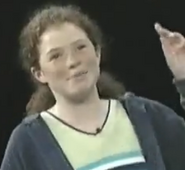 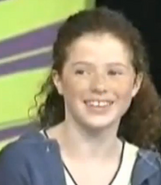 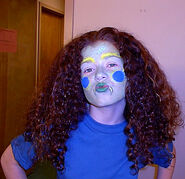 Alisa gets her face painted. 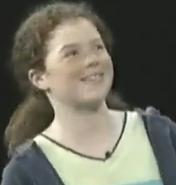 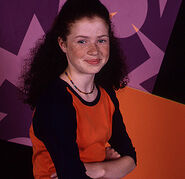 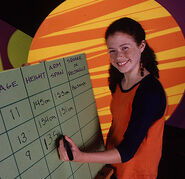 Can you figure it out what kind of chart with Alisa is doing?

Alisa and Caroline are on the floor.

How Low Can You Go? 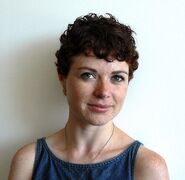